The Capybaras by Alfredo Soderguit

This book is one of the best examples of the picture book format that I’ve read in a long time. Spare text complimented by evocative – often hilarious – illustrations, convey a simple story with a subtle but complex metaphor.

On the surface we have chickens – roof over their heads, fed, enclosed, safe. Occasionally one will disappear. Otherwise, all is well.

On the other hand, the capybaras are being hunted. They flee and appeal to the chickens for sanctuary. The chickens are not pleased. The capybaras are big and there are lots of them and they are non-chickenish. Initially, the grown-up chickens resist. The chicks and young capybara are not so reticent. They get along famously. Whilst playing, a dog threatens. Capybaras can swim! A chick hops on a young capybara’s back and they swim away from the dog behind the capybaras. They are big and there are lots of them. The chick is safe! The chickens are pleased. The capybaras hide quietly in the chicken coop. One assumes the business of chickens disappearing is discussed. Hunting season ends. The capybaras leave and their new chicken friends leave with them.

This story offers lovely wisdom. Initially, of course, there are the obvious truths that it is “the right thing to do” to offer sanctuary to people who need it, prejudice and racism are wrong, etc. Beyond that, societies would do well to follow the example of children – who are generally open and accepting of other people and could care less about differences. The story further offers the truth that refugees, or migrants, new Canadians of any stripe, tend to strengthen and enhance communities they join in surprising and wonderful ways, given the slightest opportunity.

The Sun Will Come Out by Joanne Levy

Things to love about this Canadian book – the title! The musical Annie is not as ubiquitous as it once was; but, the optimism of the title and the song – Tomorrow - are especially welcome, in April 2021.

The Sun Will Come Out is a coming of age novel. Here, that comes demarcated as our protagonist – Frankie – enters a summer camp world alone. Initially, she clings to her existing definitions of selfhood relative to her family and best friend; but, in her new surroundings they are increasingly meaningless. New relationships – arguably healthier ones – challenge her to redefine herself as more. Frankie spurs herself to try harder, because another friend is selfless and brave despite facing bigger problems. And when another friend needs help that only Frankie can offer – namely, stepping into the role of Annie – she steps beyond her identity as “the shy girl” and sings the songs she’s known by heart all along, with her clear, strong voice. That’s a pretty eloquent metaphor for growing up, isn’t it?

Trip of the Dead by Angela Misri

Sequels can be disappointing – not this one.

I loved Pickles vs the Zombies. This next installment features Trip - the lone raccoon character - leading an expedition and – eventually - several rescue missions. He befriends a bossy Irish hedgehog,  a squirrel with a fabulous tail (RuPeter) and a creepy boat, a family of beavers, and  - hooray!! - dozens of raccoons.  Trip’s away team includes an assertive, brave, respectful kitten (Yes, Sir! Mr. Trip!) trying to pull above her weight, and Pal the young owl who wipes out every time he lands. The hedgehog is constantly explaining to other animals what a hedgehog is. One of the raccoons, nevertheless, is constantly asking “what kind of raccoon are you, again?”

All of this content really appeals to my sense of humour – which - I flatter myself - is likely on par with the average nine to twelve year-old. One of the funniest characters – ever - is Emmy. She is a maniacal hamster warrior. She makes basically a cameo appearance in a climactic scene where she has engineered a trip rope trap/zombie bonfire. Fear not!

The author’s acknowledgements promise book three will feature Emmy, as the title - Valhamster suggests. I cannot wait! Meanwhile, please recommend this book to anyone who loves to laugh. (I’m hoping that’s everyone.) 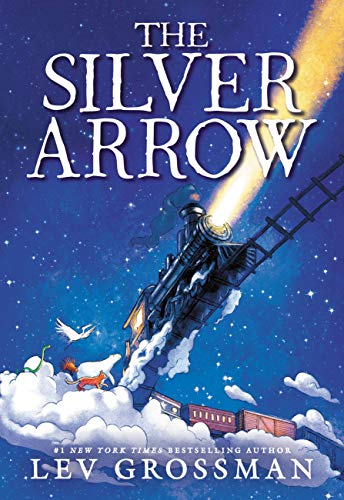 The Silver Arrow by Lev Grossman

I started this book because I wanted a simple, fun, escape from 2021 and all its COVID-19 glory – worrying, inconceivable dystopian headlines, irrational stupidity, etc. Mission accomplished with The Silver Arrow!

Two kids – Kate and her little brother Tom - climb onto a magic talking steam engine that charges off across their backyard and way beyond. Along the way they build a train with a candy car, a swimming pool car, a mystery car – and regular cars too - then drive all over the world picking up talking animals – only the ones with tickets, though. Kate and Tom, the train and all of the animals have hilarious conversations and a lot of fun.

Great books achieve more than one thing. Mixed into the action-packed, comedic plot are other themes. One theme stands out, that the world’s creatures are precious and need protecting. For example, all of the animal characters are unusual, endangered species – a white bellied heron, a pangolin, a fishing cat, a green mamba, etc. Mentioning these species might encourage kids to look them up. Also at one point the train needs firewood. Kate and Tom and their animal friends enter an ancient forest and ask the trees for wood. In exchange, they magically become trees for a time. The scenes that follow are incredibly moving, as Kate feels, moves, and experiences seasons, wind, cold, and sunshine, as a tree.

Finally, I’ll quote the mamba character (page 208) as I think this is the reason Lev Grossman wrote the book. The mamba says Kate shouldn’t “…feel bad about what humans have done…Feeling guilty doesn’t help… Humans are animals doing what all animals do: surviving. It’s just that you’ve done it too well… You’ve won, you’ve taken over the world. Now you just have to take care of it.”

Recommend this book to readers as a fun, magic escape. The book may also spark a passion for environmentalism.